The entire household, over the past two weeks, has been redecorated. My room is no exception! I'll post photos when it's finished, it's pretty cool.
Posted by Unknown at 11:08 AM 1 comment:

Holy shit, it's been a while!

That was the same day Ian came up for the weekend -- which was very much fun, and very much tiring. In a good way.

I spent Tuesday in bed -- no, no, get your mind out of the gutter, I was sleeping!

Wednesday, I went with Paul and saw Avatar. Fucking AWESOME movie, and quite frankly, I enjoyed seeing a movie that pushed the idea of all life being interconnected, and showed just how destructive Human ways are. Seriously, we need to be more like the Na'vi, and learn to live WITH the planet, and not live OFF it. (But that's a rant for later. ^_^)

Thursday night I went to see Cheech & Chong "Get It Legal" -- hilarious! But there must have been something in the air, because all I remember is Chong going on a riff about cats, stoner cats, and how you can tell they're fucked up. (Hint: If you throw the cat at the curtains, and it doesn't stick, it's stoned.)

On a side C&C note, I swear at least one of them was sparking up backstage -- I could SMELL it.

Saturday, yeah... you guessed it. I stayed home. Liz dropped by, and we went and visited my parents and OMG, Gracie just LOVES Liz's nails! (Not that I'm surprised.) Chatted into the small hours with Ian.

Sunday. Valentine's day. Dammit, now that I have a mate, why does he have to be in Seattle?! I can think of several things I'd like to be doing right now, but they're all couple-y things. *sigh* I'm going to go eat ice cream and mope.

Oh, and in honor of the holiday: 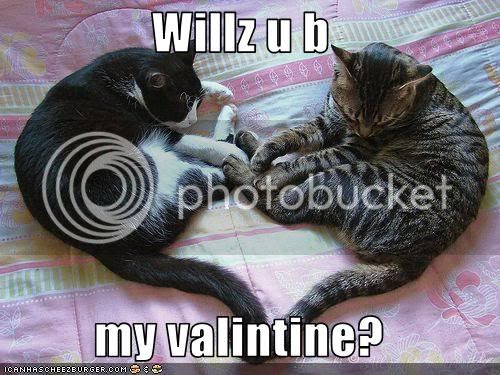 Posted by Unknown at 3:44 PM No comments:

Email ThisBlogThis!Share to TwitterShare to FacebookShare to Pinterest
Labels: read this

I know I picked on blacks a bit in my last name rant. Well, "kreeaytyve", "yooneek", and downright awful names aren't limited at all by race.

ESPN -- pronounced "Es-pen" (I shit you not, it's true!) What's next, naming your kid NASCAR? I can only imagine the poor kid saddled with this name is from the South, and probably from a trailer park.

Look... man... just... THINK, please, before naming your crotch-droppings. Make sure it's something that isn't going to embarrass the poor kid, or become a hindrance in life.
Posted by Unknown at 1:07 PM 2 comments: