I don't much care for cheese.

The Jackass loved cheese. Like, forget the knife, just hand him the whole block, right?

He had to have complete control over the food. What we bought. How much. And it was always stuff he liked. And a lot of the foods he liked are things that I just... can't eat, for various reasons. He was on a steady diet of high-fat, high-cholesterol, salt-laden, heavily-processed crap. And cheese. (But I repeat myself!)

So, grocery shopping, we'd buy a block of cheese, right?

Within two days, 80% of that block of cheese would be half-melted to the top of the microwave, with a weird oily slick around it.

Because somebody "forgot" to put it away.

And just happened to leave it on a surface not only made of metal, but painted black, and in perpetual, direct sunlight.

A spot I wouldn't find it until it began to smell.

If this had been a one-time or once-in-a-great-while thing, and he'd been conscientious about putting things away in the past, and continued to do so in the future, I'd have been fine. Everybody occasionally forgets to put something away now and then, it's not a huge deal.

It was every. Block. Of cheese.

With gentle reminders and requests to please put that back in the fridge so it doesn't rot.

And then he'd get angry at me for throwing out the nasty-ass mess HE made.
Posted by Unknown at 12:32 AM No comments:

We openly refer to my ex -- the abuser discussed in my last post -- as "The Jackass".

I can't remember precisely how it came about, but I'm probably not far off in saying that The Jackass had done something jerk-tastic in front of my parents. Because, yes, he really was that big of a douchebag.

NOTE: I initially wrote this as an answer on Quora, to the question "What incident has traumatized you for good?" I'm reposting it here because I don't feel like re-typing all this.

The six or seven years I spent with my abuser. Yeah, I’m including some snark in parenthetical comments, some of which is stuff I always wanted to say to him.

When I met him, he was charming, intelligent, polite.

It started small. Pushing tiny boundaries, asking me to do things I was slightly uncomfortable with, small transgressions that you’d typically just brush off because “relationships are about give and take,” and most relationships do require some compromise because even the best, most compatible couples aren’t going to agree on 100% everything. And, you know, most couples work these things out in a way that works for both parties. Right?

If he wanted sex, he’d just roll me over (or drag me out of my wheelchair) and take it. From whatever orifice he decided he wanted to violate. Whether or not I was in the mood. Regardless of whether or not we had guests. I’ve been raped vaginally, orally, and anally.

He’d stay up all night playing video games. In and of itself, not necessarily a problem, and I’ve been known to pull all-nighters while gaming, myself. The problem was, he’d crank the volume UP until there was no way I could sleep. His excuse? “I can’t hear it if you turn it down.” (But he could somehow hear me just fine muttering obscenities under my breath? Yeah…)

I offered him headphones to use. “But they hurt my ears!”

And gods help me if I just so happened to make more progress in a game than he did! (Like, I swear I’ve seen more reasonable toddlers.)

His diet was just atrocious — all carbs, fats, and meats. He had no respect for my dietary needs, and forget about the occasional treat. Then he’d blame me when the inevitable digestive disturbances happened. (Because I just loved having chronic diarrhea, and was totally doing it on purpose…)

And then there was the physical violence.

He didn’t hit me a lot, but he did use physical intimidation (twice my size, three times the weight, able-bodied) and the threat of violence quite a bit. When he did hit me, it was always my fault. I shouldn’t have told him to give me back my things. I should value him more than a seat cushion. I shouldn’t have contradicted — or worse — corrected him. I should have kept my mouth shut. And yeah, there’s a story behind the seat cushion thing, it’s really weird, man.

I’d gotten a new seat cushion for my wheelchair. Now, proper support and positioning is important, not only for my joints, but for my skin. He got it into his head that this somehow meant the seat cushion was “more important to me” than he was. Which is friggin’ stupid, yeah? Well, he then decided to take a knife to my brand new cushion in retaliation for this “insult”. Result: One permanently deflated seat cushion that would no longer offer the required support, and YEARS of skin issues.

Back to the physical violence — I’ve been bitten (skin broken), stomped in the ribs, slapped, punched, manhandled, choked out, forcibly restrained for no good reason, and held at knifepoint. All by the same person.

So, seven years of this. And over those seven years, there were multiple contacts with law enforcement.

Here comes the kicker. The cops always, without fail, took his lies as truth, and would only ever tell me to “stop provoking him.”

The pigs only took action after he assaulted two able-bodied men.

It’s traumatizing enough to spend seven years suffering domestic violence, and yeah, that did a lot of damage.

But the most traumatizing thing? The thing that scares the living shit out of me?

The police not giving a single, solitary fuck about victims of DV.
Posted by Unknown at 8:36 PM 1 comment: 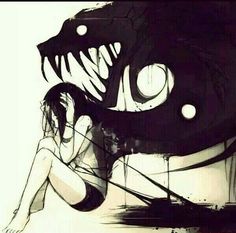 You know those dreams where there's something terrible chasing you?

The ones where you can't ever run fast enough, because no matter how hard you try, you can only move slowly? If you can move at all?

All the while, the monster -- you can't see it, but you know it's big and evil and indescribable -- the whole time it's gaining on you.

Almost close enough to grab you.

Always out of reach.

But close enough that you can feel it breathing down your neck.

You know that absolute terror?

Try living like that all the time -- except the monster is living in your head, and there's not even the hope of waking up from the nightmare.

It's the shadow that constantly hangs over you, even in the brightest light.

The unnameable thing in the darkness that drives you to insanity, not just with the fear, but with the constant doubt planted by people questioning what you could possibly have to be anxious about.

Which, of course, just feeds the beast, because if there's "nothing to be worried about", you must be losing your mind!
Posted by Unknown at 2:10 AM No comments: